Thank You to the Knight in Blaze Orange

I was going to write about something trivial and marginally humorous like Facebook insinuating that some of my friends are sad and pathetic by asking me to post on their wall or suggest friends for them (and wondering if I'm in that category on my friends' pages).

Yesterday, I walked out through the snow and ice to start my car, wondering to myself why I hadn't done this ten minutes earlier so my car would be nice and warm. I saw the guy parked next to me scraping his windshield. 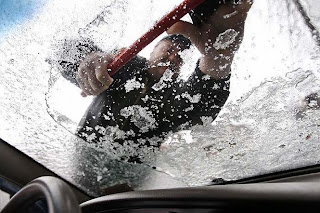 After I climbed in and started my car, I leaned over to see if I had an ice scraper anywhere in my vehicle. After all, it's only December. Why would I need one of those already??

As I'm fumbling around digging in the car door and side cubby, I hear a loud grating noise on my windshield.

There is the guy who was parked next to me, scraping my windshield! I was dumbstruck. I really didn't know how to respond. In fact, I think probably my mouth was gaping as I tried to comprehend what he was doing.

Chivalry is not dead!

After he finished scraping the driver's side, I thought, that was really nice and was about to put the car in reverse. Then I see he's scraping the passenger side.

And then the back window.

And then the side windows!

This guy is unbelievable!

He scraped all the windows on my car. And all I could muster was a big goofy grin and a thumbs up.

I have no idea who this person was. Probably a student here. But he has shaken my deeply held prejudice against 18-year-old males. (Sorry guys, but so many of you are just slackers!)

Anyway, I highly doubt he will ever read this cyber shout out. I realize I have a loyal readership, but I doubt either of you know who this guy is either.

I'm hoping that by sending this thank you out into the universe, maybe someone else will be inspired to do something so thoughtful and unexpected today too.