Black Friday has been starting earlier and earlier every year.

I remember watching the line outside of my local Pamida press up toward the front doors about ten years ago on my way to work. It was about 6:30 a.m. and they were opening at 7 a.m. 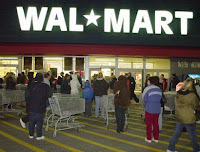 People are losing a lot of sleep. This is not healthy.

Secondly, I can't think of one thing that Old Navy has in their Black Friday Flyer that is worth getting up at 2 a.m. (or not going to bed at all) for which to stand in line at 2:30 a.m. to push other retarded, sleep deprived people out of the way. 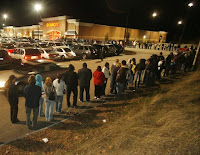 So my next question is when does all this ridiculous one-ups-manship between stores just push everything into Thursday? Why not just open at midnight instead of 3 a.m.? Lots of stores do midnight releases of games and movies. Why not save us all the short night of sleep and just let us come in after our Thursday afternoon nap? We'll be all rested and ready to run for that ultra cheap LCD TV.

Wouldn't this likely cut down on the car accidents from some mad shopoholic driving in the wee morning hours when he/she is over tired from only sleeping two hours and texting to her friends that Wal-Mart is out of Snuggies?

Or perhaps I am missing that people are actually starting their Black Friday shopping on Thursday because they go camp out in the parking lot of Best Buy Thursday afternoon. They bring their recliners and portable HDTVs, unzip, kick back, and watch football there instead of at home. 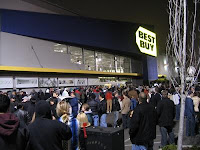 This might actually be a good thing. All the rest of the family is saved from seeing Uncle Bob's furry keg spilling out the especially grateful-to-be-finally-unzipped waistband. They can relax and let their turkey digest in visual peace whilst the rest of the Best Buy clientelle enjoy the scenery.

Whatever the reason and whatever time you start out, I hope any of you who are brave enough to wade through the endorphin-crazed bargain hunting crowds get your coveted zebra print Snuggie!
Posted by A. at 1:50 PM