A penny (or two billion) for your thoughts 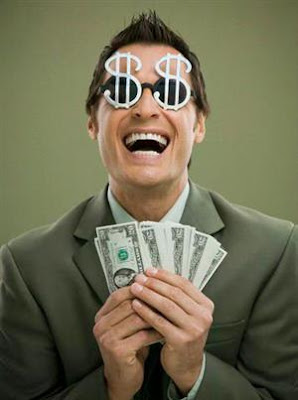 So apparently my random and pointless Facebook comments and status updates are worth A LOT of money.

Turns out there are companies out there that pay a heap of money to get data on all kinds of little tidbits found on Facebook and other social networking sites, blogs, product reviews--pretty much anywhere on the net where you have a profile and volunteer information.

According to a piece run on NPR this afternoon, "There are now companies that mine social sites for data to sell to marketers."

What in the world could they possibly find that would be worth selling, you ask?

Just from that little exchange, these site crawlers, or whatever they are called, have determined that all of us who responded have small children. Guess what we'll be seeing soon on our Facebook sidebar? Ads for diapers, toys, GAP kids clothes, and who knows what else. We are a very attractive demographic!

How about this exchange I read just now:

All 15 of these people are now known to be definitely interested in winter sports. Not maybe because they shop at Scheels or because they live in Montana. Definitely. Now they'll probably see ads for Vail and Big Sky packages on their page.

The pressing issue for me is not privacy, although I suppose that should be my primary concern. I suppose I should care if just any random person can find out my age, sex, marital status, hobbies, religious affiliation, employer, and number of children. That's why I have a pretty blank profile. And also why I pretty much never take surveys or quizzes on Facebook.

But what I really want to know, where's my cut?? If my information is so valuable, why not just ask me? I'd sell my medical records if the price were right. (Don't worry, Grandma. You're shirt is still safe.)

So don't be mad if I don't join your pillow fight or accept your lil' cove fish or whatever it is people are sending now. I'm just stalling until I get a better offer.
Posted by A. at 1:44 PM 4 comments:

When I was in high school, all the loser kids hung out at SuperPumper at night and on the weekends. The cool kids would go to whatever party was going on or would cruise main street. (I'm not going to go into the third, even more lowly category I fell into...the invisibles.)

Yes, it is really mean to call them all loser kids, but you remember high school, right? High schoolers are mean.

Anyway, the more appropriate and accurate description from my current older, more dignified perspective would be to say they were the lower income, underprivileged, possibly dysfunctional family kids. And the cool kids were likely the white, middle class kids--also likely dysfunctional, just better at hiding it.

So jump to the digital age. Kids hang out online now. They pick favorite social networking sites and they text and they Tweet.

Is MySpace the new SuperPumper? According to a report on NPR yesterday, it might very well be. 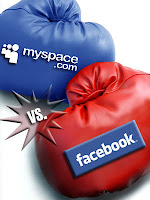 According to the report, MySpace is out and Facebook is in. The reason? As one teen interviewed stated, "It seems trashy to me. The only people who use it are trashy people."

And as the reporter went on to find, the 65 million "trashy" people on MySpace have their own theories about who uses which medium.

(Quoting directly from the article)

"I have friends who are white," says 19-year-old Diego Luna. "They are my white people friends and they are mostly on Facebook. That's why I use Facebook. My brown people are on MySpace.".....Benito Rodriguez, 16, adds, "Not to be racist or anything, but there's more white kids on Facebook."

Are MySpace and Facebook the modern version of the Sharks and the Jets?

And if so, where do we sign up to learn the dance moves?

I think I would have to identify myself with the Jets/Facebookers.

But according to the article, the artsy-types hang with the Sharks/MySpacers. I love artsy types. I want to be an artsy type. I'm going to have to start creeping around behind my Facebooker friend's profiles to see what the MySpacers are up to, maybe pick up some great design tips or new hip band suggestions. At least most MySpace profiles are viewable without doing a friend request. I would for sure be blacklisted if my Facebook friends found out I'd been friending MySpacers.

It's going to be a difficult life trying to bridge these two worlds, but I guess I (along with all those salivating advertisers out there) will have to try. It's just too morally rupugnant to me to live in such a digitally divided world!


I hate you Woody. You are a loser.

You plaster yourself all over TV telling me about how all I have to do to get a free burger is become a fan of you on Facebook.

So what do I do? Sorry pathetic gullible patsy that I am, I do it! I become a fan. I give you my email address. I read all your silly updates about how you're close to a million sandwiches! Oh, and make sure you give me your email address so I can send you your free sandwich!

I planned a weekend in Bismarck, and according to your winsome sweet nothing promises, it should be in my mailbox by the time I go. Yay! Free meal for me!

It doesn't show up.

I check again the night I get into town.

I check again the night I'm going to leave.

I get home late Sunday night. Well, will you look what the cat dragged in??

There it is in my mailbox, snottily staring back at me, mocking me now that I am 200 miles away from the nearest TGIFridays.

I open it even though I know it's too late. And there I see it--the damn coupon is only good from the 11th through the 14th. I would NEVER have been able to use it!

Why promise me the world and then fail to mention it's only available from the hours of 2 and 4 a.m. on the 32nd of December??

So I am a teensy bit mellow dramatic.

But it could just as well have been those ridiculous stipulations. If you really wanted to give me a free sandwich, Woody, why such a narrow window? Could it be that you were secretly hoping I would NEVER BE ABLE TO GET MY FREE SANDWICH??

I think you know the answer.

I hope you can live with the shame your deceit has caused. I hope your so-called million sandwich giveaway ends in a food poisoning lawsuit that bankrupts you. I hope all the people who did come in for their free sandwich ordered only the sandwich and nothing else. I hope they failed to tip and in protests all your servers quit.

Well, I have a profile now. But I'm still looking for contacts.

And frankly, I'm amazed at how few of my contacts have LinkedIn profiles. As someone who hammers into her students on a daily basis how important networking is to finding employment, I find it interesting that of all my colleagues in the Career Services sector, only three have profiles!

Maybe LinkedIn is too new and they just haven't discovered the importance of it yet, but that fact does not seem to be missed by other career professionals. In a recent article in the Minneapolis Star Tribune, writer Matt Krumrie states that, "Using LinkedIn is a must for job seekers and professionals looking to connect with others."

I totally agree with this given that the statistics are that 80% of jobs are not advertised and found through networking.

To be fair, a person can network on Facebook or MySpace just as much as they could on LinkedIn, but networking on Facebook is more like meeting someone at a party whereas LinkedIn would be the equivalent of a professional networking event or visiting them at their business.

At LinkedIn, everyone is expecting professionalism. When a prospective employer looks at your LinkedIn profile, they'll hopefully get a good handle on your work experience and capabilities. If they are checking out your Facebook profile, they are more likely to find out about your weekend activities, family, and vacation photos.

That's not necessarily bad, and really everyone looking for a job should make sure their Facebook page is cleaned up. But LinkedIn is by far the more professional first impression you want to present.

So, to all of you who are not yet LinkedIn, Please! Please go create a profile. Upload your resume. Add a PowerPoint presentation you've done (God knows we've done enough for these classes!). Synch your email contacts. Find a professional picture of yourself and upload it. Write a killer summary of your experience and talents (If you can't, get someone to help you becuase this particular part is really important to getting noticed.).

Tweeting is for the birds....

It's official. I am a Tweeter.

Or is it Twitter-er?

I fought it long enough. But when my alma mater and current employer invited me to follow them, I had to. It would be rude not to, right?

So anyway, I don't know what to do with this. Updates on current happenings at my school will be handy, but another batch of emails! I'm going into information overload. I've just gotten the hang of Facebook. And it's stealing a lot of my time, both professionally and personally.

I have to update my Facebook group for my professional organization. I have to manage the status updates from all my 'friends.' I still have my regular emails--three addresses and counting--and let's not forget the old fashioned phone and voicemail. I don't know if I can handle one more communication venue.

I do see some value in having updates on weather conditions, road conditions, sports scores for my favorite teams, maybe sale notices from a preferred retailer. But I get all that in email, so why do I need it again on Twitter? I don't have unlimited texting, so I'm not going to have these tweets sent to my cell phone. And if they are sent to my email, then that's simply a duplicate of the email notifications I already get.

I propose that all those marketers, public relations and communications specialists out there please consolidate. Please just give me one form of contact and I promise to pay attention. After all, isn't that what you want? My attention? Isn't that the new commodity?

And really, any other kind of personal updates, like I'm shopping till I drop, or FML, or I just picked my nose--I don't really care. I'm not going to subscribe to yet another form of narcissistic egocentric me-ism. I'm inundated enough with all my Facebook updates and Youtube videos. If I have to waste my time on any more useless information, my eyes will bug out of my head worse than SpongeBob. Wait, that already happens when I watch SpongeBob.